In our ongoing plan to watch interesting films and visit interesting cities, Clare and I attended FilmFest Dresden in April 2016. We attended 6 of the showings covering 45 short films, and I’ve picked out my top 10 favourites below.

The trailer sets the tone suitably:

A note on context

While the festival is primarily about the international and national short film competitions, we’re most interested in animation, so we focussed on the (non-competition) animation strands. Since these are curated out of some of the best animation over the past decades, this has the fortunate side-effect that almost all of the films I found interesting are available to view online!

Do also note, however, that the viewing context here is almost completely opposite to the festival experience. On the internet, you can skip through a video or stop at any time; when attending a short-film selection, you are far more obliged to take in everything put in front of you. You also know very little about what is to come – in fact I can’t think of any other media experience that has a wider gap between how little you know about the work, and how strongly you are compelled to consume all of it!

(An emergent result of this is the applause behaviour of the crowd. It seems an audience for short films will usually applaud at the end of each one, but if the first film is over-long, distasteful or otherwise displeasing no applause will start, and the crowd will remain silent after each film! However, if they are then shown a particularly delightful film, applause will break out, and is then likely to continue after each subsequent film regardless of quality).

Consequently, I recommend using your internet browsing power to get a taste of the highlights below, and then set aside the time and find a good screen to watch the ones you like the look of most in the best way, back to back.

Photograph of Jesus (2008) is a whimsical animated documentary on the subject of less reasonable requests received at the Getty photographic archive:

Jain: Come (2015) isn’t really an animation, but combines a number of nifty visual effects throughout and achieves a few particularly striking moments:

Dahlia (2008) is the most abstract of the films I’m calling ‘accessible’, being a montage of stop motion-style animation generated seemingly off-the-cuff by looking for interesting things in San Francisco. Nevertheless it achieves that thing I’m always looking for: a kind of animated beauty unlike anything I’ve seen before.

We caught Wider Horizons (2015) by at one of the festival’s award-winner roundups (in this case the Minister of Fine Arts Promotion Prize), and I’m glad we did. It’s a fascinating animated documentary on what a holiday by the sea was like in East Germany in the 80’s. Being more recent you can’t view it online yet, but here’s a trailer:

Some animations displayed were significantly more abstract. This is where the festival format really shines, because if it were easy to turn away or fast forward, most people would, but when you don’t have that choice you must simply allow yourself to fall under the spell being cast. Well, that or perhaps fall asleep.

Recycled (2013) was my favourite of the whole festival. As the film usefully declares near the start, French “collector” Thomas Sauvin salvaged over half a million photos (!!) from a recycling plant; over three years, the Chinese artist Lei Lei picked out 3000 (!!!) and, presumably with some amount of computer assistance, assembled the following montage/animation. It starts out quite abstract, but soon you realise hundreds of images are being carefully strung together to produce a kind of emergent stop-motion:

Imagine yourself in a screening of short films, and the next one begins with a caption informing you that “All animals photographed were found as roadkill”. I felt a silent wave of apprehension ripple across the crowd as Yield (2013) began in this way. Fortunately the film was about the most promising thing one could make from that alarming preamble, achieving similar effects as Recycled by stringing unrelated photos together to generate animated effects. Fascinating, but still very disturbing, so I won’t embed it. (link)

Continuing the theme of achieving artistic results through ridiculous amounts of effort (as animators are fond of doing), Liquid paper (2010) generated animated figures by flicking through catalogues with pages cut in precise shapes:

An alternative demonstration of prowess is to produce a work that implicitly asks the audience to wonder: how on earth did they do that? This was demonstrated in Kaizer (2006), in which a steadily rotating camera taking in a crowd continues to pan while people move forwards and backwards with hypnotic effect:

(This reminded me of State of Flux, which appeared to show a continuous traversing shot over a water barrage while the water itself flowed impossibly backwards and forwards, although I suspect was achieved by a very different method).

Finally some more experimental works each elaborated on a simple idea with perhaps too much thoroughness, testing the patience of the casual viewer (and perhaps being more pleasurable online where you are free to take as much or little from it as you like).

Atman (1975), makes extravagant use of a sequence of possibly just 12 photos of a figure sitting in a field in some sort of Noh mask:

Spacy (1981) makes portals out of photos within photos to dizzying effect:

When it comes to the Q&A section of an event, I think Kate Beaton summarised it best: 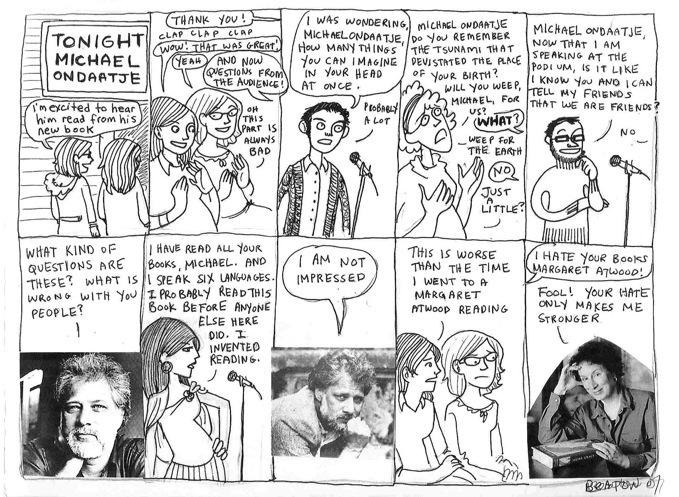 At the animation events, a new layer of entertainment was added to the proceedings thanks to the need to support two languages. The host (Carola Queitsch I think) began to translate as necessary. Unfortunately for her, much of the questioning and discussion was conducted by the academic curators of the films, who would tend to elaborate on an idea with run-on sentences for about two minutes, after which she was expected to provide a summary in English; possibly one of the hardest translation tasks going.

To add to the fun, everyone concerned actually knew a reasonable amount of English as well as German. As a result, primed by hearing the host’s English translation, the speaker would then resume their line of thought or questioning in English – which obliged Carola to then translate into German, provoking a response in German, and so the language cycle could begin again.

Over the course of several showings the translation approach was tweaked, finally settling upon having a film-maker more fluent in English, Gusztav Hamos, translate the high-brow musings of academic curator Thomas Tode. This seemed reasonable, but it gradually became clear that the words did not correlate: Thomas offered his opinion in German, and then Gusztav would make some alternative point in English, to which Thomas might respond in German, and so on. This proved more entertaining and satisfying than any other alternative and so became the main approach.

A more surreal form of Q&A arose when Japanese animator Maki Satake was brought on stage to answer questions about her work. It proved difficult for her to understand the questions posed by the German-spoken English, even when they repeated just the nouns in the sentence with more emphasis and waved their arms for effect; the curators asking the questions also already knew the answers they were hoping to evoke, so ended up spelling out the point completely, enabling Maki to, when understanding was reached, finally answer ‘yes’. A translator from the audience volunteered to smooth things over, but, perhaps on the basis that this would have been too easy, was only called upon to help out with one question.

Finally, in one of the most entertaining Q&As I’ve seen, the children attending the special selection of child-friendly animations were invited to ask particular animators about their work. In a revealing clue to a child’s understanding of culture through the lens of gender, the animator behind a work starring an animated reindeer and a live-action young girl was first asked point blank by a boy: “Why was it a girl and not a boy?”. The animator shrugged, but this line of enquiry provoked a stir among the young crowd, who then demanded to know: “Is the deer a boy or a girl?”. (While neither implied within nor important to the film, the animator responded that the deer was a boy, perhaps because he had provided the animal’s wordless vocalisations).

This raised another important question from a child in the audience: “Does the deer like dancing?”. It should be noted that the film did not involve dancing in any way. Vaguely intimating the rules of improv, the animator got over his initial confusion at the question to answer in the affirmative.

Finally one child stumped the animator by asking “Do you know what reindeer eat?”, to which he could only hazard “Grass… and cocoa?” (the deer was depicted drinking hot chocolate). The host was about to move on when he realised that this had been a rhetorical question, and the child wished instead to impress his own knowledge of the matter upon the audience, demonstrating a precocious understanding of how adults usually interpret their part in a Q&A: “Chestnuts… carrots… and grass. And cocoa.”