How do you holiday? 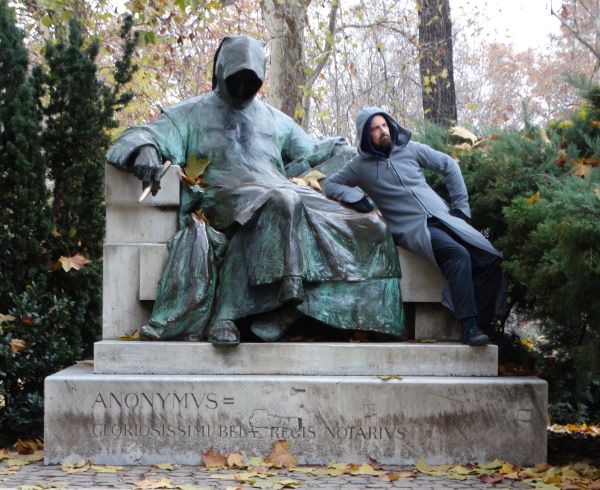 The possibilities, if you really think about it, are overwhelming. You could visit every village in Yorkshire that has a funny name and interview strangers about nomenclature. You could systematically visit every city in the world with a population greater than one million in alphabetical order, consuming only media in that city that begin with the same letter. You could stage a murder mystery party with friends on the actual Orient Express.

The problem with any of these ideas is that they only make you (or me at least) feel more strongly that there’s an even better idea out there that you’re missing out on. Obviously if you also have children, things are further complicated.

So, here’s my generic quite-interesting-holiday generator that feels fairly optimal:

Clare and I love animation, and needed a holiday before Christmas; consultation of festival listing websites like this one meant we ended up in Budapest in late November 2018, to attend the Anilogue animation festival.

If you’re travelling within Europe, I maximally endorse The Man In Seat 61, a website by Mark Smith, who uses his extensive rail experience and appetite for railway-based research to maintain this incredible resource, covering the best routes in Europe and how to buy tickets. Including getting from London to Budapest via Eurostar and sleeper train: 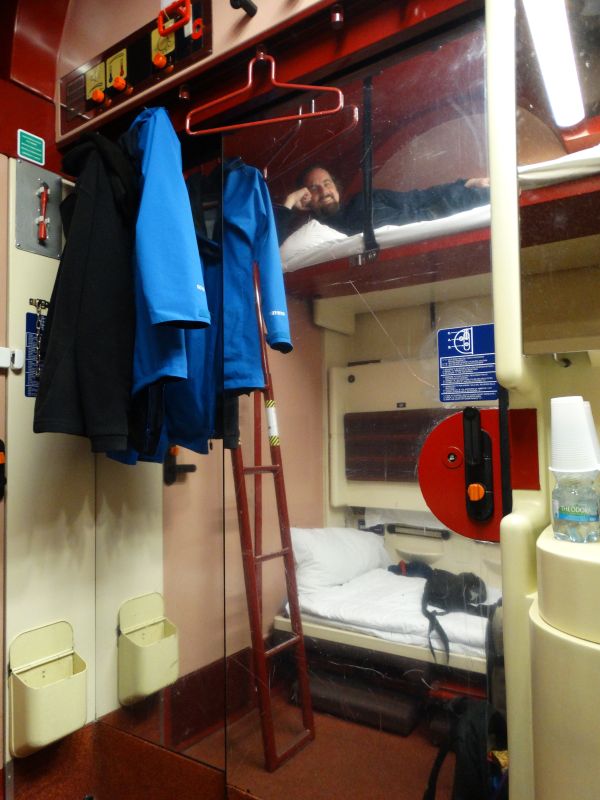 As a moderately well-travelled UK resident, I am embarrassingly ignorant of Eastern Europe. Visiting Budapest was a great way to start putting that right. Here’s an extremely terse list of the things I found most insightful: 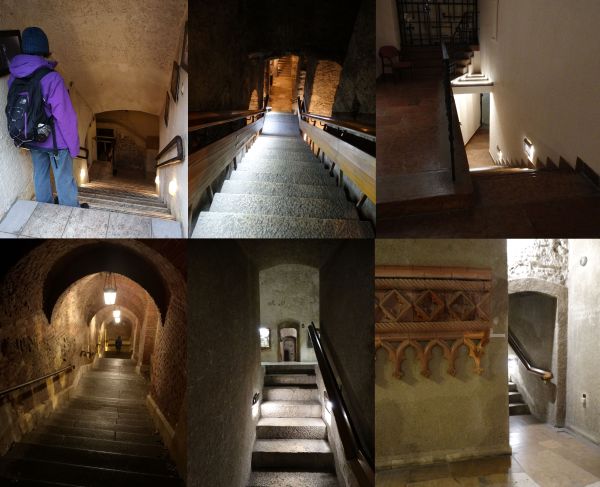 If you’re planning to go, I would recommend the following two things slightly off the beaten tourist track.

Everything you would hope it could be: 140+ pinball and other arcade machines from all eras, all playable for free for as long as you want, covered by one very reasonable entrance fee. 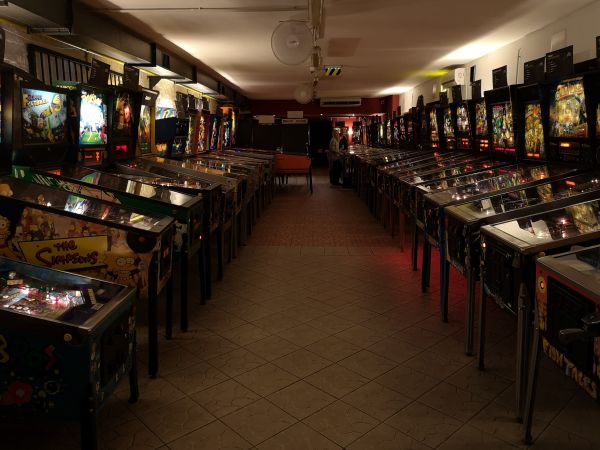 An interesting trend you can experience here is that over decades pinball machine design tended towards faster movement but also greater player agency.

Two kilometers of poorly lit and unsupervised tunnels, with an optional detour you can take entirely in pitch blackness; warm, damp, and with some creepy mannequins to encounter. You can tell from that if you’ll love it or hate it. Also, surprise cinema screening sub-cave: 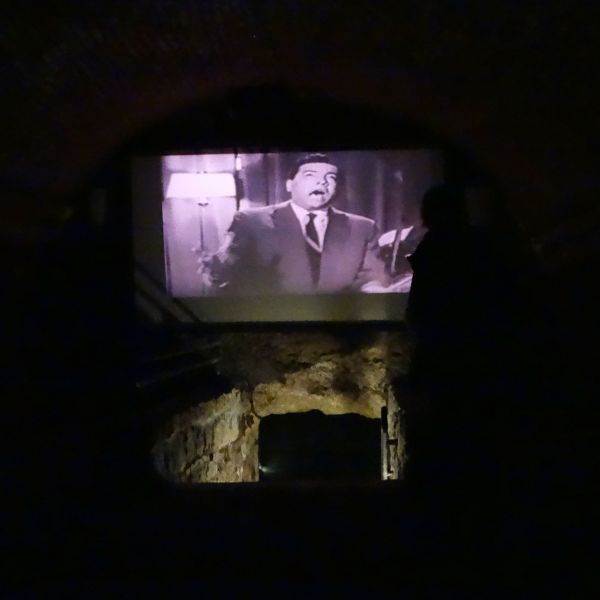 We caught four of the feature-length animations shown as part of the festival’s competition: 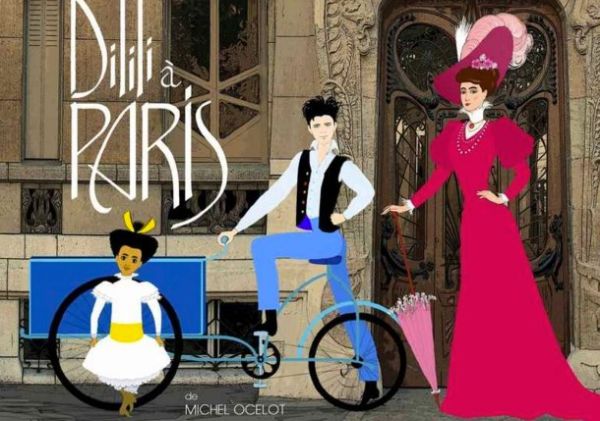 Director Michel Ocelot’s series of African folk-tale Kirikou films saw him graduate from a traditional 2D animation style to a sort of 3D cell-shaded version that surprisingly maintained their idiosyncratic charm. Dilili transposes the action to Paris, maintains the precocious child protagonist, and adds real-world photography to the backgrounds, which some might regard as cheating and others as efficient, but most importantly is aesthetically interesting.

The story requires a certain amount of suspension-of-disbelief as it takes in just about everyone who was anyone in Belle Epoque Paris, and like the best children’s stories gets surprisingly dark at times. While I’d sooner re-watch a Kirikou, I’m nonetheless extremely interested to see what Ocelot does next. 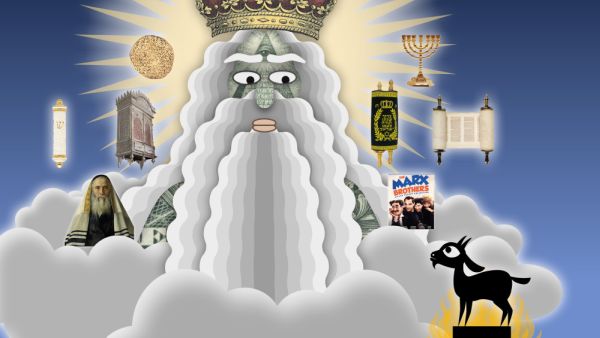 Nina Paley’s debut feature Sita Sings the Blues entwined a personal story of love and loss with the Ramayana as told and discussed by several Indian storytellers, accompanied by some brilliantly-chosen out-of-copyright songs by Annette Hanshaw. The nature of copyright was something Paley studied and wrote about extensively, and that’s at least partly why the film is available for free.

Her long-awaited (by us at least) follow-up Seder-Masochism takes a somewhat similar approach by juxtaposing the story of Moses with her childhood experience of the traditional Jewish Seder, as recounted by interviews with her father – again with some extremely well-chosen songs, this time from a range of more recent artists, in a direct challenge to the restrictions of copyright law as it stands.

Overall though the result seemed less successful, assuming quite a lot of knowledge by the viewer, and ending up somewhat unevenly weighted. It doesn’t help that there are ten plagues to get through, each animated with amazingly ridiculous aplomb to a range of surprising music choices.

The film tacitly addresses the fascinating topic of how an ancient history of goddess-worship was supplanted by more patriarchal religions in multiple cultures. The musical format elevates this to a visceral feeling of an ancient and epic tragedy, but begs many more questions – fortunately there’s a bibliography at the end.

Similarly, the topic of Paley’s own upbringing and relationship with her parents doesn’t dig too deep, and one senses that she is limited by the range of the (now 7-year old) recordings of her father she had available.

If you haven’t already, you should at minimum watch This Land is Mine to see the kind of effect Paley is so great at creating.

Instantly recognisable in style and tone as an autobiographical coming-of-age story that started life as a graphic novel, Virus Tropical finds a way to breathe animated life into the idiosyncratic caricatures of Power Paola’s original comic, retaining the charm without merely puppeteering cutouts. Being based on real life, the story is strangely meandering, but told with a judicious economy that holds the attention throughout and leaves a strangely lasting impression of life growing up in South America. 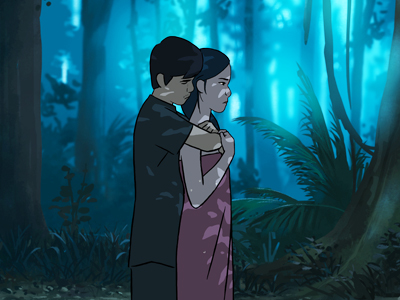 Denis Do’s directorial debut Funan draws from the harrowing real-life experience of his own mother, trying to survive and keep her family together through the Khmer Rouge’s brutal regime. It was particularly haunting to see in Budapest, having read and seen so much about Hungary’s double occupation. Most importantly, I think a film like this paints a vivid picture of day-to-day life in such a regime that history exhibits barely begin to evoke. 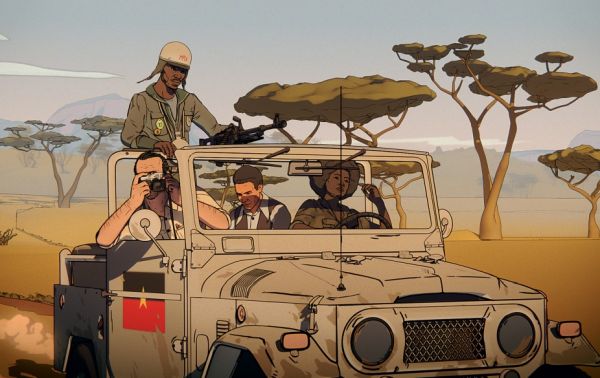 The ultimate winner of the festival’s feature-length competition, and another film on regime change, this time covering one reporter’s experience of the outbreak of civil war in Angola (1975-2002), which quickly became (another) proxy battle in the Cold War. The film joins the dots all the way from geopolitics to ground-level reality, and also powerfully intercuts live-action interviews with some of the participants in these events. Where Waltz With Bashir cut in live action at the very end to bring the message home, Another Day of Life does well to round out some of these characters and ground the story by intercutting more regularly.

The film is rendered with a fascinating take on the cell-shaded 3D style, backed up with motion captured performances. The result is visually arresting, especially on some of the dreamlike interludes, but has one major shortcoming: in a simpler animation we easily accept that the voices are emitted by the characters you see, but in some sort of uncanny valley effect, Another Day Of Life fails to achieve this, and the combined effect is a little less than the sum of the parts.

Art in general and animation in particular is fascinating for the range of creative possibility, but also frequently disappointing: faced with the possibility of creating anything, the average human (or typical artist) is seemingly interested in visualising just one thing: naked people.

Having seen a lot of short animations over a fair few festivals, there are also a few standard tropes that now rarely evoke much interest:

Skipping over those (although some amount of (3) is depressingly hard to avoid entirely), a few highlights stood out:

Łukasz Rusinek’s music video, Ohoho (Vimeo) was my overall favourite. From the perfectly musical gait through to judiciously timed glitching, it’s a synaesthetic joy, even if a little (3) sneaks in there:

Vojtěch Domlátil’s Waves experiments with the idea of combining time-lapse photography from rolling fields with the sounds of water, to increasingly fascinating effect:

Something of a reversal of trope (1):  SOLAR WALK by Réka Bucsi. Available in full on Vimeo; trailer on YouTube:

Directed by Lucia Bulgheroni, Inanimate gets very meta with the stop-motion ouvre, and is well worth seeking out for an epic and exquisitely planned wide shot at the climax, which the trailer only begins to hint at:

In Jon Frickey’s Neko No Hi (Cat Days), a young boy is surprisingly diagnosed with cat flu, compellingly conveyed by the doctor using an outline drawing of a cat with a molecule in it. Here’s a trailer:

Georges Schwitzgebel’s The Battle Of San Romano brings Paolo Uccello’s 15th Century painting to life in a mind-boggling loop, which you can glimpse for a tantalising moment about 19s into the Anilogue 2018 trailer:

I’ve seen semi-abstract rotoscoping used to beautiful effect a few times, most notably in Ralf Hildenbeutel’s 2-minute Disco, but never before at the scale of Zbigniew Czapla’s Strange Case, which you can glimpse from this trailer:

Anilogue was a lovely animation festival, although the weekday afternoon shorts screenings were surprisingly poorly attended. Perhaps this was due to the programme being published only a few days in advance, or possibly being in conflict with the simultaneously held Israeli film festival. On the plus side this did mean we got to have some interesting conversations with two of the jurors (Piotr Kardasz and Veljko Popović).

Through the history and art explicitly on show and implicitly embedded in the battle-damaged city, Budapest reads as a plea to humanity: to learn from history, and to strive for peaceful, democratic power transitions. Those lessons are just as urgent now, especially in Hungary, to the point that I would specifically recommend checking the gov.uk travel advice before planning a trip there, as the current political trajectory is looking depressingly familiar.

- Tim Mannveille tweets as @metatim and also wrote about IDFA 2016 and Tricky Women 2011.

This entry was posted in participant and tagged animation, budapest, festival, film, travel. Bookmark the permalink.